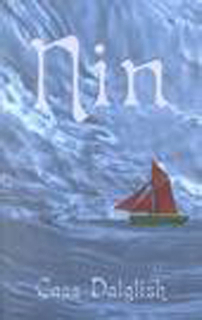 Book Forum
Cass Dalglish's Nin (Spinsters Ink, $12) is not a study of Anaïs Nin; in fact it is just about as far from Nin as any novel could be. Bold in an almost entirely intellectual way, it's about a feminist professor-poet call Nin Creed and is much concerned with manuscripts and printed matter. Indeed, Dalglish "is currently," says the blurb "translating the first singed document in history, a poem written by a Sumerian woman named Enheduanna." It seems a fair bet to say that Dalglish, who teachers at Augsburg College in Minneapolis, lives very much in her mind and in the minds of others, just as the people in this unusual novel keep delving into one another's books and incunabula and private educational rituals (Nin's father is a famous Aquinas scholar, her husband photographs the roots of plants for the agriculture school in the college where he and she teach). Her mother, who died when Nin was born, was a scholar and linguist and it is in search of her lost writings that Nin ends up in Haifa, Israel.

In a way this novel resembles those movies, Japanese or westerns, in which the hero(ine) assembles a team of samurais or gunslingers with whom to confront the bad guys. Dalglish does this buildup well, which is how she does just about everything in this novel, widening her range from impromptu poems dashed off on campus to canny reference librarians who just happen to be on hand with all the right info. This is convenient fiction, intended to please the author as well as us. What Dalglish does next, in a book littered with the names of philosophers, theologians, persecuted clever women (she throws a party for them all), is to invoke the aid of two medieval intellectuals, Christine de Pizan and Marguerite Porète, magically introduced into the textual ferment by that recent contraption, the Internet. This seems to me an even more adroit maneuver than the computer-aided hypertexts written at Brown University. But that's not all: We also get a snootful of two Mesopotamian writers (see how Dalglish's research pas off), enheduanna (of course) and Ninshatapada. It's refreshing to encounter a novel that isn't scared to be brainy, intellectual, allusive, and at least as literately animated as Henry James The Aspern Papers. Associate Professor Dalglish should be promoted at once for being unabashed. She handles the preparations for Nin's quest with acute, pensive writing that subtly gears you up for the ultimately successful search.

It wouldn't matter a hoot if all these erudite-sounding names were faked: Nin is almost a funeral Pale Fire, the specter of burned books from Alexandria's famous library to Adolf Hitler's blacklist hovering over the entire narrative like a helicopter. Interestingly enough, the arrival of the Internet almost makes book burning obsolete, and it certainly saves Nin's mother's lost writings.

Foreward
The literary feminist fable, for all its PC piety, is hardly a foolproof genre. All too often its didactic intentions succumb to humorlessness, and lifeless, allegorical plotting overtakes the flesh and blood characters. Witness no less than Margaret Atwood caught in the thorny path of The Handmaid's Tale. Luckily, Nin has just enough earnest charm of its convictions to instruct the jaded and entertain the believers. Nin Creed, a creative writing teacher and poet, living happily in Vermont, was born in Haifa, Israel, to a famed translator of Thomas Aquinas and his wife (a secret scholar of ancient manuscripts) on the day her mother and her grandmother died in a traffic accident. Inheriting her mother's cryptic notes and papers (as well as her English Catholic turn of mind), Nin accepts a peculiar offer to join a study group of women in a pilgrimage to the Holy Land. This being the modern world, Dalglish grounds her questing heroine with firm skepticism and a lovely sense of the ambience of her birthplace. From the plastic Jesus-shaped bottles sold as holy water containers, to the dusty blur of viewing so many tombs, Nin notes everything in her ever-present notebook. Also, she has company, accompanied by Christine de Pizan and Marguerite de Porète, two medieval authors who happily cite their own banned works to refute the misogyny of Aquinas, Plato, and Socrates. The latter's venue? No less than the internet, wisely called the ethernet, where electricity dematerializes matter into etherized non-space, and voices into disembodied floating lines on a screen, all written in the digital poetry of ones and zeros (or marks and ciphers, if you will). While this female Symposium may lack some of the visceral bite of Germaine Greer and Norman Mailer's debate at New York's Town Hall meeting once upon a time, its spirited defense of women reclaiming the copyright of their own work against the megalith of male culture makes for lively reading. Nin is something of a bus(wo)man's holiday for the author, an associate professor of English at Augsburg College in Minneapolis, where she is currently translating the first signed document in history, a poem written by a Sumerian woman. This same Sumerian ("I understand it's called Iraq now") appears at the abandoned gravesite of Nin's mother, conducting an ad-hoc class in translation of her own cuneiform tablets, archeological fragments Nin stole from a museum. In the tangled strands of oral tradition and written poetry, the human need for story-telling is affirmed: myth and matter are one.

Publishers Weekly
"We are back from some sadness," the narrator's father says at the opening of this novel of reclamation, remembrance and fantasy. Poet Nin Creed, born to a scholarly mother the day she died in an auto accident in Israel, decides as an adult in Minnesota to reclaim her mother's legacy. Raised in Vermont with sister Annie by her father and wise cook Aurelia, at age 11 Nin reads in an old Haifa Israel English Gazette of the circumstances of her mother's death in 1951. She learns that her father was invited by a Father Louis to teach at a college of theology in Haifa, but the truth proves more complicated: it was Nin's mother, not her father, who wanted to relocate to Israel to pursue scholarly research "looking for patterns, gestures, repetitions" that might lead to the Grail. However, much of what her mother had assembled was lost in a mysterious fire ("the ultimate editor of history"). As an adult, Nin establishes herself as an "aerobic poet" who gains notoriety for penning verses on command; she returns to Vermont and, later, Israel. What unfolds is a literary and spiritual detective story. Nin's scholarly sleuthing turns up a garland of female writers across time, including Christine de Pisan and Marguerite Porete of the 14th century, who act as Nin's guides, and together they try to make sense of the fragmentary clues Nin manages to uncover. Though some of its New Agey mysticism is facile, this book raises compelling issues of gender and history, and of the ways in which both influence representations of truth and meaning.
(Nov.) Copyright 2000 Reed Business Information, Inc.

Lambda Book Report
Read this book. Please. I have been e-mailing people urging them, as I am urging you, to read this book.
–Carol Rosenfeld