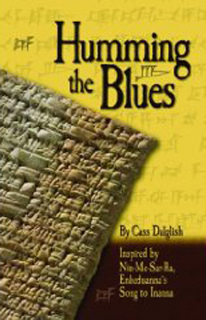 This is an animated section of Enheduanna's Song to Inanna.  It is Cass Dalglish's interpretation of the cuneiform pictographs pressed into clay by the ancient Iraqi poet, prince and priest Enheduanna, 2350 BCE.  She is the first writer in history – male or female – to claim written text as her own work.  The full interpretation of this work by Cass Dalglish is available as a print book,  Humming the Blues,  Calyx Books. Animation created with Aaron Gabriel and Andrew Newton.

"Poet/scholar Cass Dalglish throws the five thousand year old cuneiform pictographs onto the page with the masterfull skill of Pollock, revealing the priestess's gasps, sighs, squiggles, howls and roars. An original, seething and shimmering work matching the depths and intensity of its content: darkness and rebirth. Crucial to be read in our times."

–Diane Wolkstein, Inanna, Queen of Heaven and Earth: Her stories and Hymns from Sumer.

Feminist Review
Review by Ilinca Popescu
Sunday, January 18, 2009
Humming the Blues, Cass Dalglish's interpretation of a series of ancient Sumerian tablets, is the ultimate feminist text—our own Epic of Gilgamesh, without the ubiquitous age-old plotline of male friendship, insignificant women, and manly strength-based quests. It has been translated from Nin-me-šar-ra, a poem pressed into clay by Enheduanna, the first known poet, and prince and high priest in the two city-states of Ur and Uruk in Sumer, around 2350 BCE.

Written in a time where gods, princes, and priests were not catalogued by gender, written language took the form of cuneiform signs where one symbol could have more than twenty meanings, thereby involving each reader not as part of an audience, but as a unique interpreter, modifying and reworking the text with each reading, which Dalglish has strived to reconstruct.

Enheduanna's song-poem reads as both a love song and a cry for aid for and from the god Inanna. Inanna’s willful journey to the Land of No Return is recounted, and Enheduanna tells of how Inanna was stripped of clothes, crown, and jewels; killed; and hung on a wooden stake by her underworld-ruling sister. But Inanna survives and comes back to life and, seeing that her husband Dumuzi is throwing a party and hasn’t yet noticed her absence, allows the demons of the underworld to take him in her place.

This myth is woven by Enheduanna together with her own past, the story of how she was forced out of Ur and Uruk, beaten and raped, her temples looted. Enheduanna cries out to Nanna, the god of the moon she had worshiped in Ur, and An, the god of the heavens she had worshiped in Uruk, to help her, but they refuse. And so she turns to Inanna, singing praises of the god’s power, wildness, and beauty, and begging for her help by drawing out the parallels of both of their falls.

In Dalglish's translation, Lugalanne, literally "big man in the sky" and the usurper of Uruk who forced Enheduanna out, is referred to not as an individual but as "everyman-usurper-oppressor," thereby recasting the story in a politically feminist way, not as a simple personal retelling.

I've read the introduction of Humming the Blues at least seven or eight times, read the text thrice, and every time I come to certain phrases I must stop and reread them, again, multiple times; this book more than resonates with me. As hopeful as it is in unearthing from antiquity strong, independent women as role models, some lines still hit me too hard, almost burying my "life-giving rage," such as Enheduanna's description of her rape: "He gave me his animal horn, his ritual sword, he said it made me complete." Apparently the women-secretly-enjoy-being-raped theory is as old as our civilization.

I dislike having proof that my sneaking suspicions that we, as a species, haven’t evolved in any important way since 4,000 years ago are correct. It is, however, heartening to feel that the fight we put up now against the "big man in the sky" is backed by thousands of years of similar struggle on the part of our feminist ancestors.


Curled Up With A Good Book
www.curledup.com. © Lillian Brummet, 2009
Cass Dalglish's Humming the Blues enthralled me from the beginning; that could be due to the fact that I do have an interest in ancient civilization going back to Sumerian times. When I saw that this book focuses on the very first recorded writer (the first writer to sign their name to a piece of work), Enheduanna, a female priest back before there was discrimination and a necessity for a feminine/male name to each profession who tended to the temples and rituals for Inanna. Inanna was an ancient being thought to be a god whose family were rulers among rulers. People grouped themselves into a series of families with 12 leading heads and brutally fought over those positions. Inanna was said to be beautiful when she was young, schemed with many other gods, and was a lover to many men and male gods.

While the exterior of the book is fairly plain and simple, and the size may seem a little thin at only 66-pages, the book is deceptively captivating. Enheduanna’s beautifully written hymn “Nin-Me-Sar-Ra” depicts a time of upheaval when Inanna’s temple is attached and the priest is disgraced. Her lamentation of the treatment of the temple’s sacred rooms and rituals and her heart-wrenching appeal for justice is so emotional and beautiful that I could hardly put the book down.

The original work by Enheduanna was written in cuneiform around 2350 BCE. Dalglish, has an impressive educational background in interpretations and language studies (hieroglyphs and Sumerian cuneiform). According to the media kit, Dalglish holds a PhD from Union Institute, is associate professor of English and chair of women’s studies at Augsburg College, and has studied ancient women writings for over a decade. She is also the award-winning author of Sweetgrass and Nin. Her work as a poet and journalist played a vital role in the research and intense lyric translations that went into this project. The closing notes by the author at the end of the book give further insight into the labor, and passion, involved.

As a reviewer for over seven years, I have worked on at least a thousand books - most of which are donated to literacy and library programs. Less than one percent of these books end up on my own bookshelves; this book will be among them. In fact, it will have a place of honor on those shelves, sitting with my absolute favorite books of all time.

Nin
Nin is a magical quest that reveals the history of women's writing.
Sweetgrass

A sacred mystery about child abuse.  Finalist for the Minnesota Book Award.